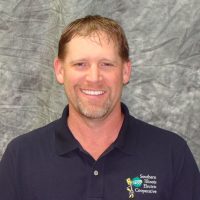 Todd started with the coop in November of 1999 as custodian. Since then, he worked on the brush crew, became a Journeyman Lineman, and Warehouse/Purchase Agent. He started his current position, Director of Operations and Maintenance, on February 24, 2019.

Todd received his degree, Bachelor of Science in Agricultural Engineering, from Murray State University in 1995. He is a member of Pulaski Christian Church and Pulaski County Fair Association. He resides in Pulaski on his family farm. He enjoys time on the farm with his family.