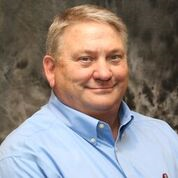 Randall “Randy” Rushing of Metropolis was elected to represent Massac County. Randy and his wife, Kathy, have been SIEC members since 1987.  They have two grown children, Zachary and Amanda and three grandchildren.

Randy graduated from Metropolis Community High School and received two Bachelor of Science degrees in Accounting and Finance from Southern Illinois University and a Master’s in Business Administration from Murray State University.

Randy is a self-employed as a CPA and very active in the community. He is a current board member of Shawnee Community College Board of Trustees, The Illinois Workforce Innovation Board, and The Massac-Metropolis Port District.  He has served as Past President of the Massac Unit One School District, and the Metropolis Area Chamber of Commerce.  He also served on the Massac County Hospital District Board for many years.